How can life be so busy when you're in COVID! Well, if you have several fibre addictions, are expecting a third grandchild, and have two others that you need to make things for as well, it's been BUSY!!

Baby Charlie is arriving any day now, to his brand spanking new parents. Since Charles was the name of both great grandfathers, there was little doubt that he would be a Charles. And the "wish list" for the nursery of hand-made goodies was long and wonderful.

A third crazy squares quilt top was pieced out of the leftovers from his cousins' quilts that are on their beds here. It is currently at the quilters and may not be delivered before he is. But it may also stay here with to add to the "cousins' quilt" collection.

A baby 'nest' was next on the list. And since 4 years ago when I made one for Everleigh, this was a much easier project. There are so many DIY videos and tutorials now that the project was a walk in the park. I think for Evvie's, I had to figure out dimensions and steps on my own. Not this time!!! I made a couple of removable pads that will be easier to wash than the entire nest. 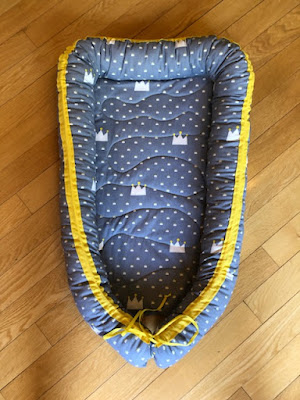 The nursery theme is "woodland creatures" and I found an adorable pattern on Ravelry that called out to all of us. The little critters were so much fun to knit, and the mobile was easy to assemble. It is now hanging above the crib. 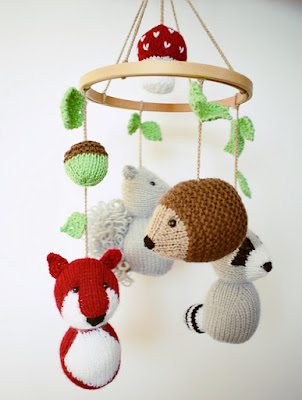 I had decided to hook him a name sign for his nursery, and rather than putting the woodland critters in the design, I hooked them separately to hang below. This way, when he outgrows his nursery and decides he loves dinosaurs or super heroes, I can hook a set of those. I attached a strip of velcro along the bottom of the sign and each of the little critters hangs from a strip with a dot of velcro at the end.  Two benefits to this plan: the critters can be rearranged whenever. Also, if a chubby little hand should tug on a critter, it will release without pulling down the entire arrangement. 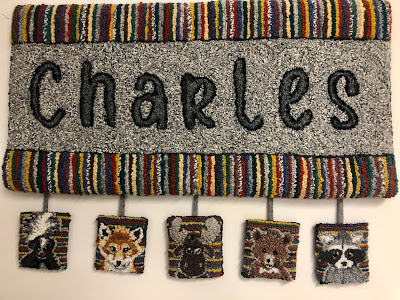 These critters were fun to hook. And I did them first. The sign is actually punched, with the same Briggs & Little yarn that was used in the background of the animals. (I rearranged the line up several times for this photo, and see now that they aren't quite evenly spaced, but maybe moving them around and rearranging them will be part of the ongoing charm.)

During production of the sign and the mobile, two things happened. Our grandson came for a couple of weeks to get some help with Zoom school while Dad when on a fishing trip, took a tumble and badly sprained his ankle. Mom was working full time on Zoom and looking after Evvie and Dad, so it was just easy for everyone to have him be here. He was quite a fan of all the "makings" for his cousin. In fact, he so fell in love with the hedgehog in the mobile that he wanted his own. I sidetracked him by showing him a picture of a knit Baby Yoda. It was love at first sight, and as soon as he was off the needles, he was a constant companion. 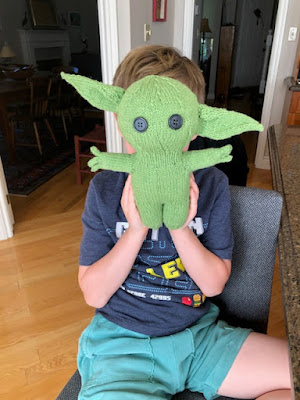 Who knew Yoda was a "wearable".  Obviously, Jackson did. 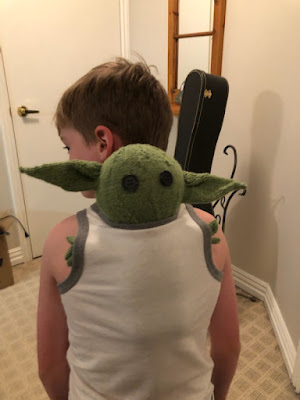 Now, what to make for his sister was the question. He knew Gram wouldn't make for one and not the other. So the search began. Lots of options, but none quite as perfect as Misha, the Ballerina Monkey!! Complete with detachable tutu, headband, ballerina sweater and leotard. 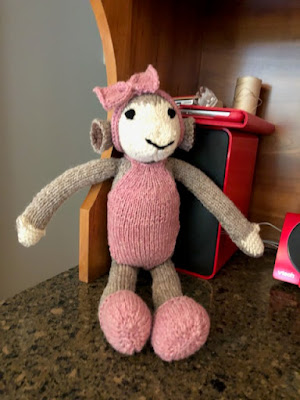 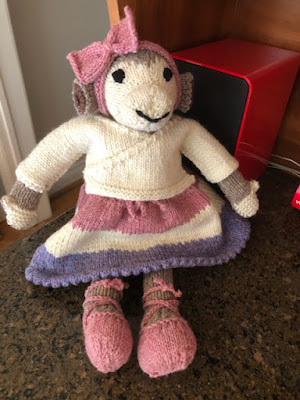 Personally, I feel her tutu is a bit too-too long, so I may do a shorter version and give them both to Evvie. A monkey ballerina can never have too many outfits! When I showed Evvie the pattern picture, she was most excited about the removable headband, which I fear will be lost immediately, unless I stitch it on. I will convince her it can be either a necklace or a headband.

The other amazing thing that happened was that Jackson asked to learn to do punch needle. I was more than happy to oblige, so we drew a little sketch on a piece of backing and I showed him the steps. He was happily punching his way along, when I noticed that he was changing hands: he would go left to right with one hand, and right to left with the other. And he wasn't even aware he was doing it. 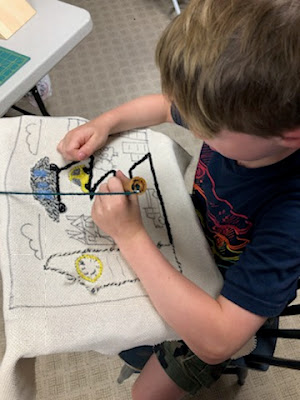 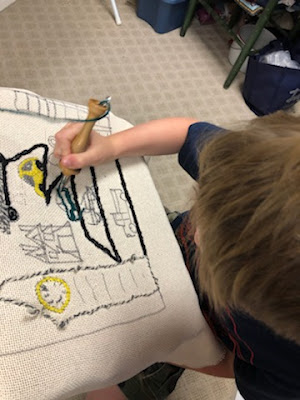 In the middle of all of this, there was a One Sock KAL at my LYS, so I jumped in. As a result, I discovered the most amazing sock yarn ever!! It is called Amble (made by The Fibre Company) and feels like butter. Soft but sturdy, it has some nylon content which will hopefully help keep my hubby from wearing through under his heel. Happily, The Fibre Company also figured out a process to create "washable wool" without a ton of chemicals and processing. Even the nylon is recycled. So your sock leaves a "tiny footprint".  And although I have a memorized sock pattern that I have knit for decades, the One Sock pattern by Kate Atherly has two things to love: a reinforced under heel (which is where my fellow wears his out every time) and NO Kitchener stitch! First pair done and dusted. Two more skeins of Amble which will may become Christmas gift socks. 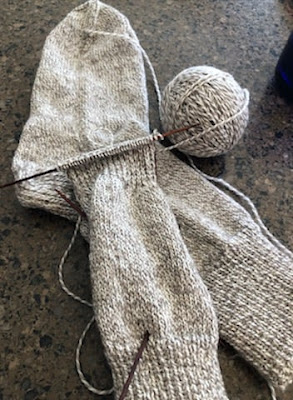 Oh yeah, nearly forgot I decided to give myself a crochet challenge and am making a duster cardigan. I am a self-taught crochet rookie, but thanks to YouTube, I found videos for all the new stitches - even for a leftie.  My yarn is black tweed flecked with lots of colours. Should go with everything. 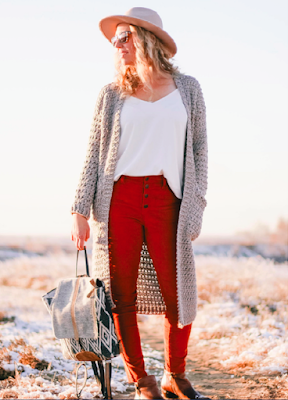 So, that's what I've been up to. And why I have been away so long. I always say I'll try to post more frequently, but life gets in the way. And I'm just fine with that!!!

August is my month! 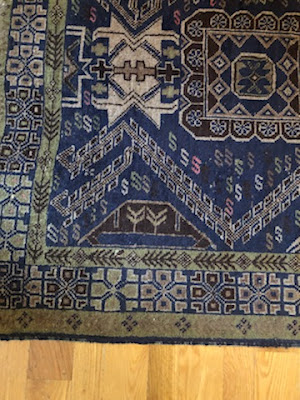 Wendie Scott Davis
Rug hooking, knitting, volunteering on various committees, writing for work and writing for pleasure: these are the things that fill my days. The commute from Peterborough to Toronto to see the family is a hop, skip and a jump, compared to our old trek. Life is good.